COMING SOON:  PENDRAGON: A NOVEL OF THE DARK AGE

Who is the Dragon?

His true identity is only whispered. His great power both feared and coveted.

But when Lucanus, known as the Wolf, and his elite unit, the Arcani, discover six scouts of the Roman army murdered beyond Hadrian’s Wall, he is thrust headlong into the quest to find this elusive figure.  It is a search that spans an empire, from the great pagan monument of Stonehenge to the warrior kingdoms of Gaul and even to the eternal city of Rome itself.

But Lucanus discovers he is only one part of a secret game with hidden factions unfolding in the shadows.

Soldier and thief, cut-throat, courtesan and druid, even the Emperor Valentinian himself, will battle to solve the mystery of the Dragon…and only one can win.

Here is the beginning of a legend, one a hundred years in the making. As the Red Century dawns and a Dark Age emerges, a Royal House is rising to give the world Arthur, Lord of Camelot, the King Who Will Not Die.

You can pre-order this book from Amazon here, or from your local bookstore.

1081. And so the bloody battle for the crown of the Holy Roman Empire begins.  Within the city of Constantinople itself, three venal factions will go to any lengths – will, it seems, kill any who might stand in their way – to seize the throne.

And outside the city’s walls, twin powers threaten a siege that will crush the once-mighty empire forever.  To the west, the voracious forces of the most feared Norman warlord are gathering. While in the east, the Turkish hordes are massing – theirs is a lust for slaughter.

And in the midst of this maelstrom of brutality and betrayal, Hereward and his English spear-brothers prepare to make what could be their final stand . . .

You can buy this book from Amazon here, or order it from your local bookstore. 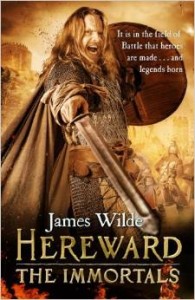 You can buy this book from Amazon here, or order it from your local store. 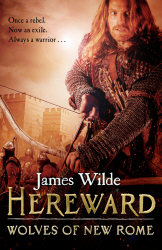 Here begins a new chapter in the stirring tale of England’s forgotten hero. But now the enemies are hidden, their methods bloodier, the battlefield and weapons unfamiliar and to stay alive in this cauldron of plot, betrayal and murder, Hereward and the English must fight as never before…

You can buy this book from Amazon here, or order it from your local bookstore. 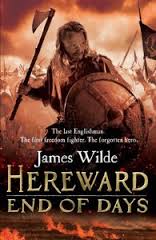 England, 1071. Five years have passed since the crushing Norman victory at the Battle of Hastings. The country reels under the savage rule of the new king, the one they call ‘the Bastard’. The North has been left a wasteland – villages razed, innocents put to the sword, land stolen. It seems no atrocity is too great to ensure William’s grip upon the crown. Rats feed upon fields of the dead

And now he turns his cold gaze east, towards the last stronghold of the English resistance. After years of struggle, he will brook no further challenge to his power: his vast army masses and his siege machines are readied.

In their fortress on the Isle of Ely, the English have put their faith in the only man who might defeat the murderous invaders. He is called Hereward. He is a warrior and a master tactician – as adept at slaughter as his enemy and plans have been been set in motion for a bloody uprising that will sweep the Norman king off the throne once and for all.

But Hereward is missing. With their hopes of victory dwindling, can the English rebels find the leader who seems to have abandoned them before William the Bastard begins his final, devastating assault that will truly be the end of days…

You can buy this book from Amazon UK here, or order it from your local bookstore.

American readers can order it here. 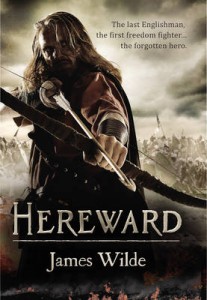 Thrilling, action-packed historical debut that rescues one of England’s forgotten heroes from the mists of early medieval history and brings him to brutal and bloody life.

1062, a time many fear is the End of Days. With the English King Edward heirless and ailing, across the grey seas in Normandy the brutal William the Bastard waits for the moment when he can drown England in a tide of blood.
The ravens of war are gathering. But as the king’s closest advisors scheme and squabble amongst themselves, hopes of resisting the naked ambition of the Norman duke come to rest with just one man: Hereward.
To some a ruthless warrior and master tactician, to others a devil in human form, Hereward is as adept in the art of slaughter as the foes that gather to claim England’s throne. But in his country’s hour of greatest need, his enemies at Court have made him outlaw. To stay alive – and a freeman – he must carve a bloody swathe from the frozen hills of Northumbria to Flanders’ fields and the fenlands of East Anglia.
The tale of a man whose deeds will become the stuff of legend, this is also the story of two mismatched allies: Hereward the man of war, and Alric, a man of peace, a monk. One will risk everything to save the land he loves, the other to save his friend’s soul…

James Wilde’s thrilling, action-packed debut rescues a great English hero from the darkest of times and brings him to brutal and bloody life in book one of the Hereward series.

or on your Kindle

Hereward is also available in the USA under the title ‘The Time of the Wolf’. 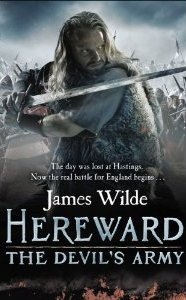 1067. The battle of Hastings has been lost; Harold Godwinsson is dead. The iron fist of William the Bastard has begun to squeeze the life out of England. Villages are torched and men, women and children put to the sword as the Norman king attempts to impose his cruel will upon this unruly nation. But there is one who stands in the way of the invader’s savagery. He is called Hereward. He is a warrior and master tactician and as adept at slaughter as the imposter who sits upon the throne. And he is England’s last hope. In a Fenlands fortress of water and wild wood, Hereward’s resistance is simmering. His army of outcasts grows by the day – a devil’s army that emerges out of the mists and the night, leaving death in its wake. But William is not easily cowed. Under the command of his ruthless deputy, Ivo Taillebois – the man they call ‘the Butcher’ – the Norman forces will do whatever it takes to crush the rebels, even if it means razing England to the ground. Here then is the tale of the bloodiest rebellion England has ever known – the beginning of an epic struggle that will echo down the years.

The story of Hereward’s bloody struggle continues in this historical action novel, the second book from James Wilde following on from the bestselling Hereward.

Read an extract from Hereward: The Devil’s Army – book two in the Hereward series.

or on your Kindle