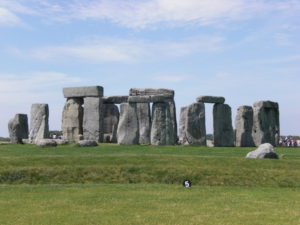 Despite the constant rumble of traffic and air thick with diesel fumes, Stonehenge still raises a frisson when it looms up out of the rolling grassland of Salisbury Plain.  It’s hard not to hear the echoes of the deep past, and feel the stirrings that the first supplicants must have felt when they processed to the site five thousand years ago.

Five millennia – think of that.  Hard to believe we’re still finding out new things, but over the last few years we’ve had a rush of discoveries that have changed all our thinking.  We now know that Stonehenge is part of a massive ritual site – how big, archaeologists are not quite sure.  But after the discovery of an underground ‘Superhenge’ 18 months ago, excitement is running high.

I’ve visited Stonehenge many times across the years, but I was on site recently while researching my forthcoming novel Pendragon, which deals with the rise of the Arthurian legend a hundred years before the Once and Future King was supposed to have existed.  Stonehenge plays a role in the book.  There were, of course, old myths that it was a Druid temple or that it was all the work of Merlin.  But we tend to forget that the mystery of the monument would have loomed large in the minds of the Roman Britons too – its origins would have been as distant to them as the invention of the Phoenician alphabet is to us.

The latest development – part of a wider trend in modern archaeology which moves away from simply “digging things up” – suggests that the role of Stonehenge was to stimulate other senses, not just the visual.  Reports that the stones “spoke” have been around in folklore for a long time.  Thomas Hardy mentioned the circle’s strange hum and featured the megalithic ring at the end of Tess of the D’Urbevilles.  Now, utilising virtual technology, Dr Robert Till has recreated what Stonehenge might have sounded like when the circle was intact.

He’s not alone.  Others have suggested the stones may have reverberated to, say, shamanic drumming within the circle which may have helped any gathered within the ring to reach transcendental states.

There will undoubtedly be much more to come.